"HOMELAND IS NOT A SERIES" // production Diary part 1

December 23, 2015
Field of Vision - Homeland Is Not A Series from Field Of Vision on Vimeo.

These posts are grouped around parts of the "Syrian Monologue" by Wasim Ghrioui from the film "Homeland is not a series." You can find a full interview with Heba Amin, Don Karl and Caram here.
All experiences and views in this are my own and may not reflect anyone else's.

In the middle of the media frenzy surrounding the “Homeland Incident”, we receive an email we did not expect: Laura Poitras, best known for her Oscar-winning documentary Citizenfour, would like to commission the newly-formed Arabian Street Artists to make a short film for her. As we documented our work on the set as extensively as possible, we send her some footage and agree to talk about this soon. I’m leaving to Beirut tomorrow, to join a project working with Syrian refugees in Shatila, one of the oldest refugee settlements in the country. Considering that for the past days, my life has been about a fake refugee camp in Lebanon, it’s a healthy juxtaposition of realities.

Beirut, October 19th.
There is sectarianism in this place, and tribalism.

Mar Michael. We sit on the balcony at four in the morning, looking out at the gigantic cranes that transport the cargo from the ships onto land. Stacks and stacks of containers. Quite unlike my last visit here, we are staying in a fancy appartement.

The fancy apartement does not have any internet. I run down to Radio Beirut, a local bar that does not cater to those who work at hours when they could be having fun, to use their internet. Due to a loud concert and a lousy internet connection, I don’t fit in with the party tribe and get thrown out of the bar. I only find out the next day that I will be flying to Cairo on Friday. We’re making a movie. I apologise to my colleagues. I feel more than a bit sorry to be leaving this way, it feels like I’m abandoning a project that is very fruitful.

We drive at breakneck speed through crowded, but fluid traffic, from the relative luxury of our flat to the assumed squalor of this refugee settlement. We are led into a well-kept building under rapid expansion.

The streets surrounding it are muddy, unkept, there is a huge pile of trash in the main street that is cleared every Thursday. Naked veins of electricity cables are suspended over every street- apparently one of the main causes of death is electrocution. Children say hello! and salam!, friendly vendors wave at us.

The place reminds me of a slum in Egypt.

It all seems very familiar- it reminds me of the set in Rüdersdorf. The Filastin tags on the wall, the faces of martyrs remind those passing through that this is a memorial space to a very different homeland. The settlement is declared as Palestine by its traditional inhabitants.

The demographics of Shatila are rapidly changing- an influx of Syrian refugees has doubled the number of inhabitants. 20 000 Palestinians have been joined by an equal number of Syrians. Is this still Lebanon? Or am I back in Berlin? This feels very familiar Cairo,

October 24th
I don’t know how I feel. The last time I felt anything on Tahrir was during Morsis’ Superman speech after his election in 2012.

I wait for Don inside the airport. Lebanese Lira are not a currency outside the country , and none of the exchange offices at the airport are willing to give me Egyptian Pounds for the blue note worth $40 I am carrying with me.

In the morning, I was in Beirut, shocked at the fact that my ticket had apparently been cancelled. After a number of calls to Vienna and Cairo and a long discussion with the Beirut Airport authorities, I am allowed on the plane. It’s the first time in my life I am confronted with this kind of treatment by an airline. Does it have anything to do with the Homeland hack, I wonder? Who in the management of Egyptair has taken offense?

I am lost in the small street which houses our editing suite. I climb to every fifth floor- much needed exercise after all the sitting (and eating) in Beirut. I finally find the place after logging in at an internet café near Tahrir. I don’t have the time to make my traditional pilgrimage to Mohammad Mahmoud street to update myself on the newest graffiti.

I arrive at the studio, sweaty and happy that we are all in one place. 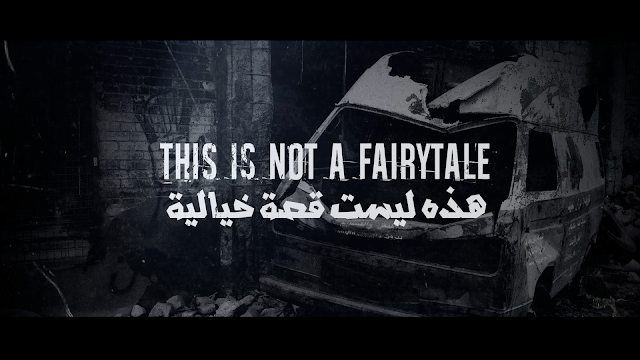 On the Plane to Berlin, October 26th
The picture has changed.

Don and I are on our way back to Berlin after a monster planning session for the film. It has been a highly creative meeting in which we have begun to grow together as a team, maybe even a creative mini-tribe. As we’re about to board the plane, Don gets an email- we need the synopsis for the film- now! Heba, on her end, has begun writing lines. On the tube to the plane, laptop in one hand and typing with three fingers of the other, we realise that this is the world’s first “Graffiti Media Hack”. And write it.

Berlin, October 26th— November 06th
Sometimes, I feel there are more Syrians here than in Syria itself.

I meet Wasim, a Syrian playwright (and refugee) living in Berlin, to record a short monologue for the film. It’s a heartbreaking piece that describes his experience and the set. For a minute, I wonder how it’s going to fit into the narrative of our nascent film, but after playing around with it and the footage we are currently using, it proves to be a very powerful break from the sarcastic tone of the movie. It gives it humanity, and adresses an issue that is going to be highly politicised in the coming weeks.

Popular posts from this blog

June 30, 2017
“You should have winked at her,” Aida said dismissively, as if such a possibility had been imaginable for someone as timid as I was. Tahia Carioca was the most stunning and long-lived of the Arab world’s Eastern dancers (belly-dancers, as they are called today). Edward Said, Farewell to Taheyya My story with Taheyya begins in the summer of 2016, at Bulbuls Café in Görlitzer Str. in Berlin.  It ends two blocks down on Wiener Str 17.  Bulbuls is a café and art space around my corner that I have grown to like to sit in and drink smoothies (1). He had commissiond us- a crew of Syrian and Egyptian artists, as well as myself, to paint the walls inside the café. El Tenneen (the Dragon) is the one who ended up drawing Sheikh Imam, with the help of Salam Alhassan (known as Salahef/ Turtles) and Sulafa Hijazis (whom we call El Hayya/The Snake’s) beamers’ illumination. The Sheikh sits happily in the place to this day and Crew El-Zoo was born. Tenneen had the adv
Post a Comment
Read more

The Books of Faragh 4: Of Lines

October 28, 2018
When Heba told me she had the prints, my first instinct was to burn them. It had been a week since our first call concerning a series of golden silkscreen prints. She,  Don and the manager of the gallery representing Heba had discovered them by accident at the Berlin Art Fair. The prints are rather unremarkable- a series of nine, subdued silkscreens of pictures taken off the internet, printed with a shimmering, golden hue. They reminded me of my grandmothers' furniture in Cairo. What they depicted, however, was very familiar to us- we had made it, and these were blatant copies of our documentation of the work on the Homeland set. Set picture: Bottom left, next to the flag: This series does not represent the view of the artists. What they had come across was a series by David Krippendorff entitled “This Show does not Represent the View of the Artist”, a tiny play on one of the slogans we used. I was somewhat flattered, at first, at this attempt at an
Post a Comment
Read more